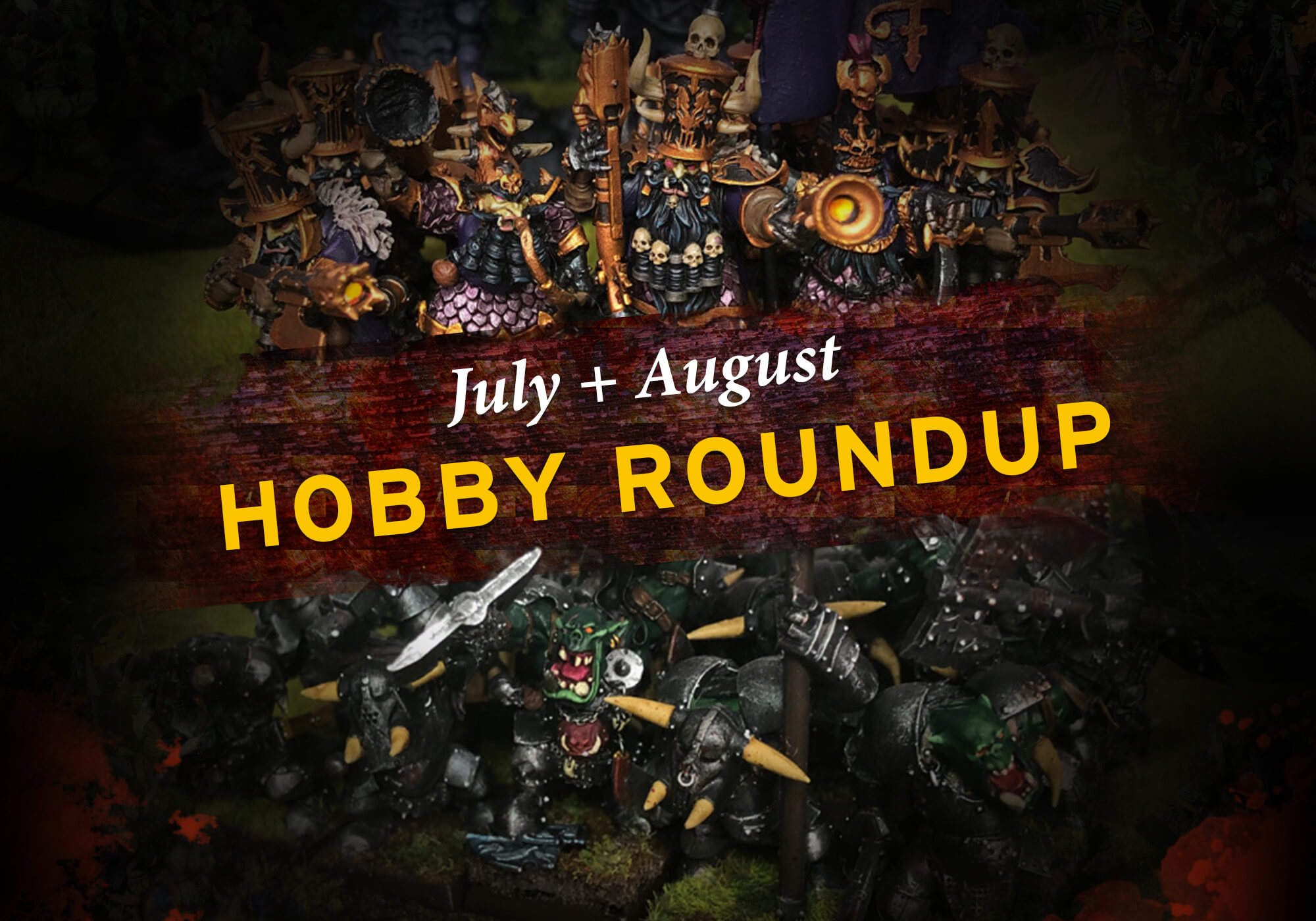 Summer ‘21 marked the start of my Prince-themed Chaos Dwarf army: the Purple Reign of Pain.

Assembled from proxies and adorned with 3D-printed Prince symbols, this will be a slow and ongoing project. Where my orcs are quick, torn and tattered, Prince’s finest are funky and flashy.

I painted 10 fireglaives, 10 infernal guard and a bear-riding Hero. Bears have no official place in the Chaos Dwarf roster, but I’ll proxy him as a bull centaur lord.

Many more to come!

An offshoot to my Prince Dwarfs, the Dread Squats of Hashut are a 40k patrol/kill team.

Proxying as Chaos Space Marines, they’re my gateway into a Crusade/Killtram campaign with friends. The models are from Scibor Miniatures with additional teeth/tusks/heads to make them Chaos-ey.

I spruced up some ancient and badly painted black orcs: bases, highlights, washes, armour grub and plenty of blood. Got them looking battle-ready in a relatively short period.

I also stripped and painted an old Grimgor model. Can’t wait to see him lead his bodyguard into battle – all 800pts of them!

Another revamp from times gone by. I think it’s an improvement, don’t you? As luck would have it, I battled this same unit the week I finished painting him. It didn’t go well.

The Chaos Dwarfs’ debut and my first time battling  the undead. Vampire Counts have an atmospheric play style, and it was a thrill to see the unstable mechanic in the…flesh. The Dwarfs scored a narrow victory, and while I wish I could credit this to the big hats, it was actually 5 hobgoblins wot won it.

Ravening Hordes Chorfs didn’t fare so well as their 8th edition counterparts. My blunderbusses were measly, and were deservedly flattened by an angry giant. Meanwhile the dwarf warriors lost to sheer numbers, and I utterly wasted the black orcs for fear of hurting them. Poor generalship made for swift defeat – lesson learned.

My Chaos Dwarfs took to the stars in their 40k debut. Proxying as Chaos Space Marines, they took a bloody fight to the Imperium, with almost every figure dead by the battle’s end. Though shaken, the Ultramarines prevailed. They return to lick their wounds and worry about the newfound threat…

Threw my buddy into the deep end with a trial run of Fantasy WAP. Outnumbered 2 to 1, his daemons inflicted bitter carnage on my greenskins. The first wave of chariots, pump wagon and fanatics fell short, which led to a painful grind as the daemons overwhelmed the weaker orcs.

Special mention to the night goblins, who survived the whole battle in combat with Skulltaker and his blood letter retinue.

So that was my summer! More Chaos Dwarfs to come, then a particularly large monster that makes my giant look like a halfling…