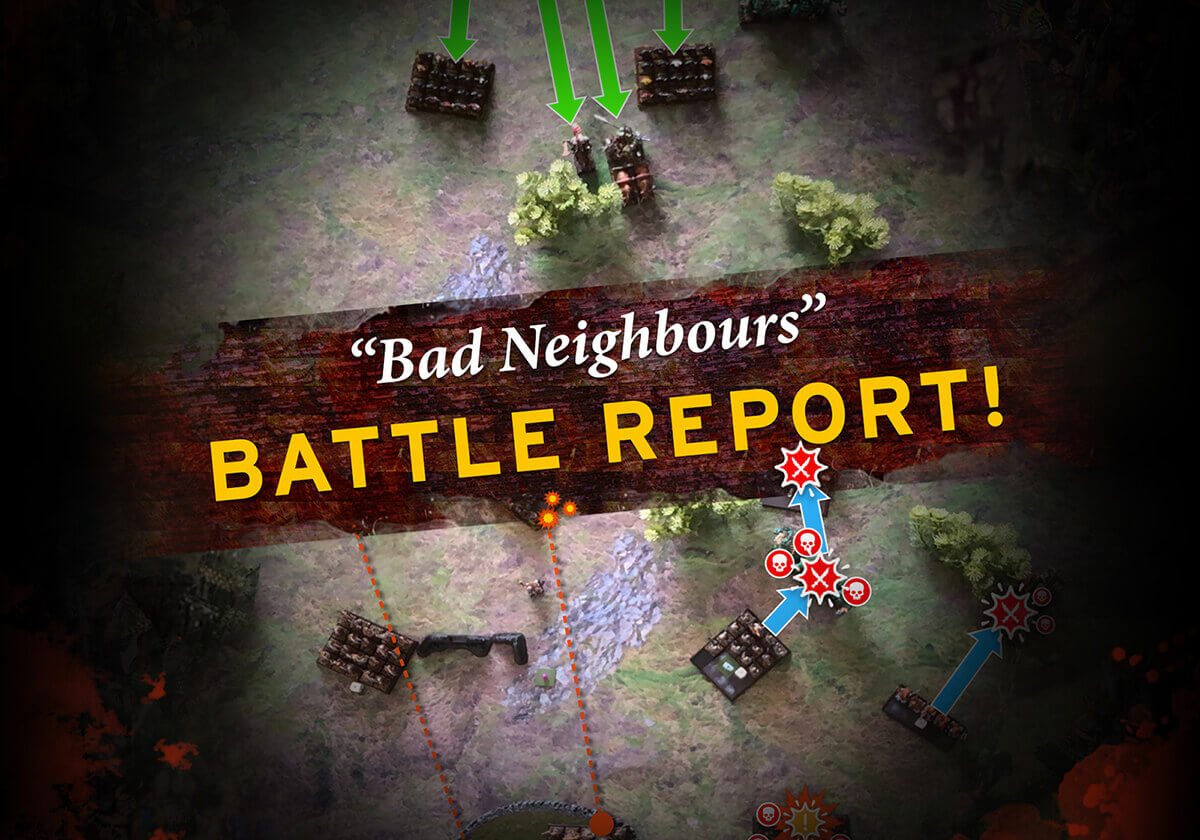 On one side are the Dwarves: stubborn, curmudgeonly, unable to forgive.

Facing them are the Greenskins: rowdy, quarrelsome, eager to earn a grudge.

Bigger, tougher and meaner than his brothers, Gurtbag considers it his duty to blood them. The horde grow restless, and if there’s nothing to fight they’ll devour each other. Those plump pink Dwarves look like a good scrap. Let’s get ‘em!

Grey of beard and long of whisker, Thograk wants nothing more than one day of peace and quiet. He yearns to sit on his throne, wash down a jug of beer and brood on grudges past. A waft of unwashed Orc threatens this. Wearily, Thograk clicks his fingers and summons his Throng. Time for war.

The dwarves advance. Slowly. Their Cannon takes a potshot at Abra-Gabara’s boiz but falls woefully short. The green rabble bark in derision as the missile thuds into the dirt.

Gurtbag roars and the greenskins lurch towards their foe – some faster than others. Powered by mighty boars and ramshackle wheels, a Chariot rushes ahead. Bickering and giggling, the Night Goblins follow. Finally, the River Trolls. They fail their stupidity test and plod mere steps forward, blinking dimly into the sunlight.

Elsewhere, the Rock Lobber attempts to “lob” at the bunched Dwarf Warriors. It misfires, and a tangle of rocks and pulleys kill a member of the crew. Telling that the first casualty is one of self-sabotage.

This Battle Report is a bit of a guinea pig: photos, diagrams, narrative style etc. If you have any thoughts or feedback on its formatting, they’d be welcome! Comments at the bottom…

At the horde’s edge, Abra-Gababra struggles to quell his Savage Orcs. They fight in a language unknown, even unto themselves. Looks like they’ll stay put, for now.

Another volley of missiles. At long range the Thunderers barely dent the Night Goblins; just one is pulped, to the amusement of his peers.

The Organ Gun sprays several rounds into the oncoming Chariot. Most of them miss, save one that finds its mark. Wood, iron and bone splinter as the Chariot suffers a wound.

Seeing this, the Slayers pivot to meet the Chariot head on. They lick their axe blades; this should be tasty.

CRUNCH! The Chariot crashes into the orange mass of Dwarf. Limbs and mohawk litter the battlefield as the two sides have at it. Half the Slayers meet a glorious death. The survivors fight on unperturbed.

Meanwhile, the Savage Orcs continue to argue among themselves. Abra-Gababra uses the distraction to cast Brain Bursta’ at Mazrim the Slayer. He dispels it with the distain typical of his kin.

CRUSHING MISSILES. The Dwarves’ patience pays off and a barrage of hellfire is unleashed on the advancing Night Goblins. The Organ Gun looses 10 rounds on one rabble. Every shot finds its mark. A squawk rings out across the valley as the Night Goblins run away.

The Thunderers prove equally devastating; 8 Night Goblins felled by a hail of Dwarf-forged lead. By some miracle, they pass their panic test and hold steady. By round’s end the battlefield is noticeably less green…

The Rock Lobber’s crew manage to untangle the machine from their dead colleague. Up flies the rock…and down it crashes into Thorgrak’s Hammerers!

Three Dwarves are driven into the ground, their graves readymade by the boulder’s impact. Jeers ring out from the greenskins as they march forwards. Even the Savage Orcs agree a truce and inch forward, closing the gap.

The Chariot’s luck runs out. To the crew’s horror, the Slayers are fuelled – excited even – by the death of their comrades. Boar, orc and machine are hacked to pieces by hungry axes. They didn’t stand a chance.

Emboldened by their previous hit, the Rock Lobber release another missile into Thorgrak’s Hammerers. The same calculation, the same trajectory and the same precise counterweight…and it misses.

The Organ Gun too suffers from minor misfortune: an ominous CLANK from its firing mechanism confirms a fault. Best make sure it doesn’t lead to something worse…

There’s better luck with the remaining artillery. The Cannon makes its first successful shot and pulverises 2 Savage Orcs. Meanwhile the Thunderers continue to pepper the Night Goblin ranks. Things are looking patently urgent for the greenskins.

Thorgrak bellows at his dwarves to march on. The Warriors, Slayers and Hammerers pivot to meet their foe.

Carnage. With an appetite for more chariot meat, the Slayers charge and swiftly destroy the vehicle ahead. To their left, Thorgrak and his bodyguard smash into the unwitting River Trolls.

Hammers crunch into bone, heavily wounding the trolls before they know what’s hit them. They look at one another and run. They get no further than a few inches before tripping on each other and landing in a pile of sweaty, sodden limbs. The Hammerers run over the hapless Trolls, hacking them to steaks as they continue the pursuit…

SMASH! The Hammerers run straight into the fleeing Night Goblins. Sick of it all, the greenskins borrow into the undergrowth – never to be seen again.

A Sad Day to be Green

The chariot, troll and goblin annihilation proves the last straw for Gurtbag. With a howl of anguish he picks up Whizzpig’s reins and retreats. Whether from rage or cowardice, we’ll never know; his run was cut short by the Gods’ supper.

A crushing victory by all accounts. Had the game not been cut short (or the 6th/8th edition missile rules not mistaken!) maybe it could have swung the other way. As it stands, the Orcs enjoyed a thorough smack to the jaw, and Thorgrak finally got his day of rest.

If you have any feedback on the formatting of this battle report, feel free to leave a comment below. Did it make sense? Were the pictures clear enough? Did the plight of the River Trolls reflect your lived experience? Let us know!