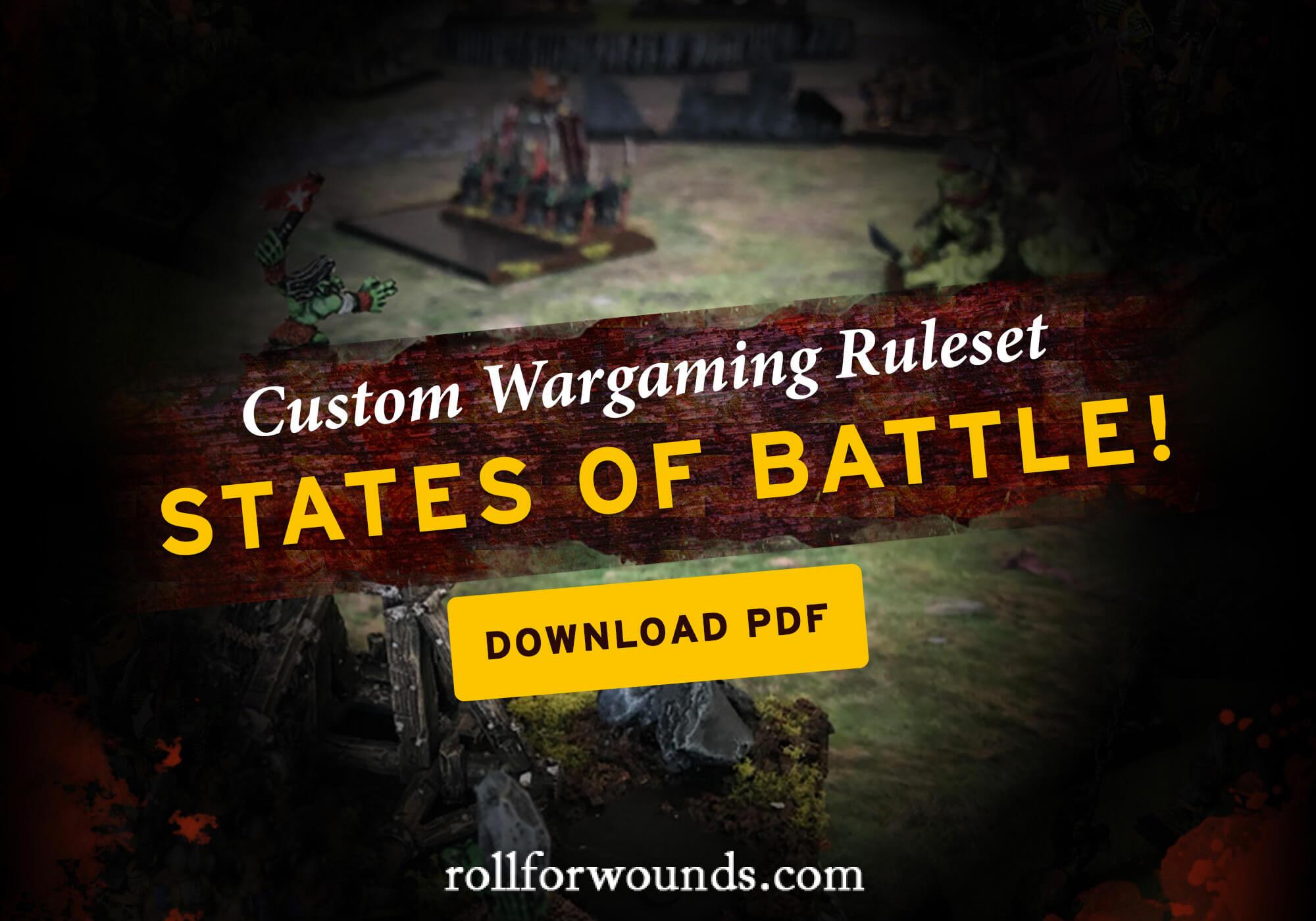 War machines fire at will, crushing the enemy with rocks and brimstone.

Acts of brash heroism are rewarded – and blunders punished.

With the next move just minutes away, twiddling your thumbs isn’t an option…

States of Battle is a custom ruleset that improves the pace, realism and “Generalship” of your favourite rank and flank wargame. It combines elements of the Piquet system with a home-brew of deck building and board game mechanics.

The result is something granular, variable and unpredictable that better reflects the carnage of battle.

States of Battle is for you to play with. As a standalone game it offers a radical alternative to the “you go, I go” turn order. Besides this, there’s plenty of scope for house rules that encourage thematic, army-specific or asymmetric play styles. Try it with your favourite wargame and see what you think!

Credit where it’s due

The original inspiration for this manual was Hostile Realms, a variant of the Piquet wargaming ruleset. Although States of Battle has evolved from this, it nonetheless owes a huge debt the Piquet system. Please visit their website to find out more about this excellent variant on wargaming rules.

(We should also point out that the creators of Piquet had no involvement in developing States of Battle, nor do they receive any income from it – past, present or future. States of Battle is a non-profit ruleset made for entertainment purposes only)

Put simply, States of Battle alters the turn sequence and victory conditions while keeping the core mechanics of your preferred wargame.

States of Battle replaces the rigid “I go, you go” turn sequence with “alternating activations”. This is driven by cards that represent individual unit actions rather than sweeping army-wide movements.

Essentially, these cards merge Movement, Shooting, Spells and Combat into an ongoing, frenetic rally. Soldiers charge out of sequence, command units embolden their nearest allies, and archers fire whenever they damn well please*.

States of Battle alters the pace and tone of the game. It doesn’t mess with the “on the ground” rules of any edition: unit stats, points values, combat resolutions, leadership checks, psychology, charges etc. Think of it as a reshuffle, not a rewrite.

The full PDF can be downloaded below. The game has been rigorously tested over lockdown and we’ll continue to tweak and add new features to this page. For now, have a go and let us know what you think!

These can be printed at home using Avery LL18 templates. Alternatively, you can get yourself a set of readymade Hostile Realms cards that contain similar card titles.