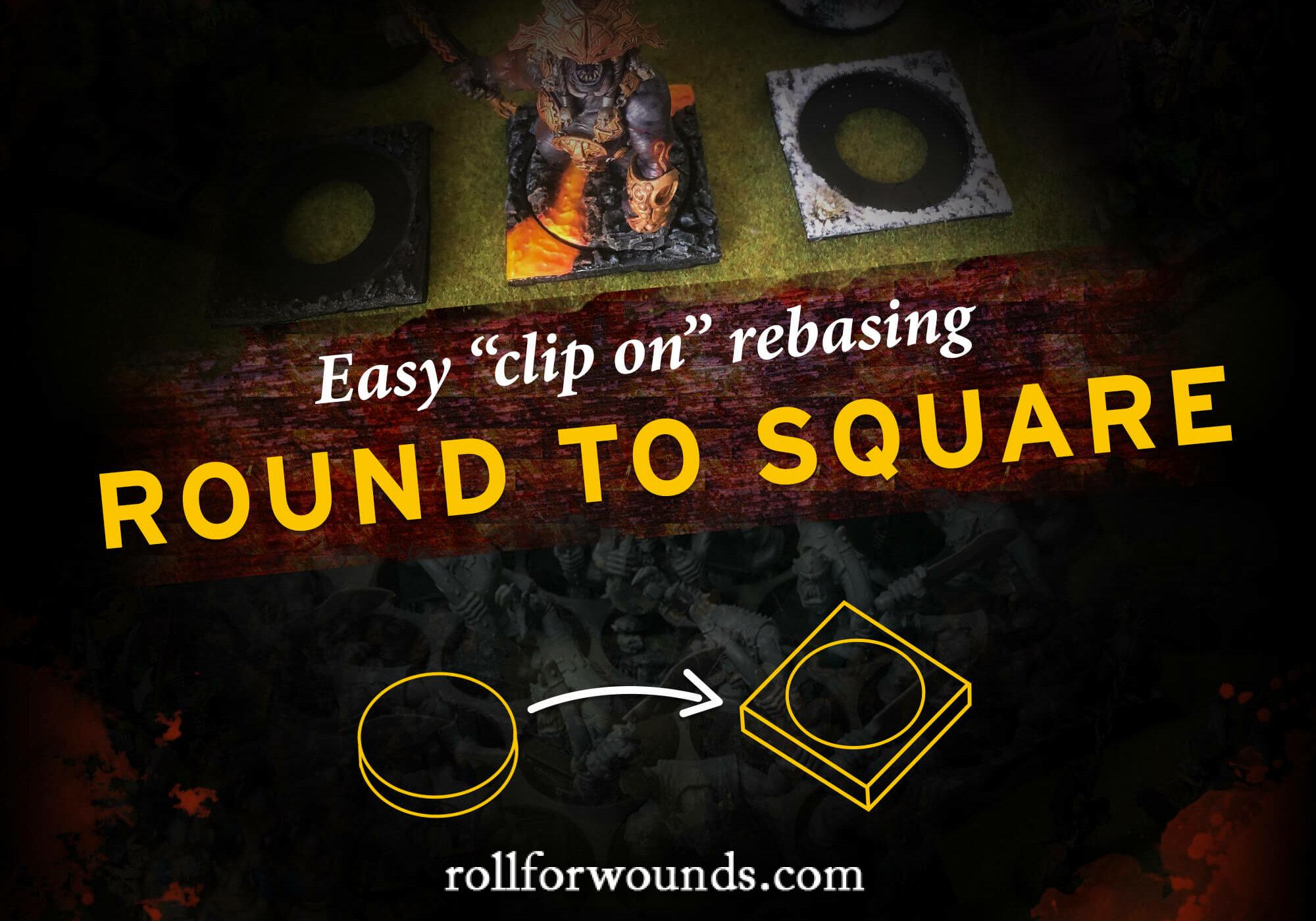 When Warhammer Fantasy switched to Age of Sigmar, there was a lot of chatter about how to switch from square to round bases. I wanted the opposite. Luckily I chanced upon three solutions. The first lets you rebase 25/40/50mm circles to an equivalent square. The second lets you fit 25mm troops to rectangular movement trays. The third uses a bit of imagination to allow 32mm troops to fight “ranked up”…

Blood Rage, the excellent board game by CMON, is the gift that keeps on giving. A smashing game in its own right, it comes with circular rings that snap to the bottom of 25mm or 50mm miniatures. We’ll use these rings as the basis for our conversion.

Though I encourage you to play Blood Rage, I’m not suggesting you buy the game just to rebase your troops. These circular base rings can be found by a number of independent sellers on eBay or Etsy.

Step 2: Cut out a surrounding square

Trace your circle and a square container into your base material. Using whatever tools at your disposal, cut and hollow until it can snugly accommodate the Blood Rage circle token.

You could use many materials for this. I used simple foam board and it’s held up very nicely. Experienced terrain builders would use wood or acrylic, I suppose.

Did I use PVA or superglue? I can’t remember. Either way, stick the plastic circle to your hollowed out base. Gaps can be filled with green stuff or more glue; you’ll be painting over this anyway.

Paint the base to match its miniature and away you go! The snug fit means you don’t need any kind of adhesive or magnet to fit them together. Just pop on for rank and flank, and click off for Age of Sigmar.

The above works fine for beefy, special units, but it’s a bit labour intensive for your rank and file. For those, I’d recommend sticking them on a movement tray. Renedra make an excellent 5 x 2 movement tray for 25mm round bases. The models rank up nicely and look absolutely fine alongside their square counterparts.

This is where it gets awkward. 32mm is too big to rank up shoulder to shoulder; doing so would add 28% to the regiment’s width. If you’re willing to do this with a regular movement tray then great — house rules and all that. If not, here’s the tidiest solution I can think of:

So what are we looking at here? I’ve aligned 2 x staggered movement trays such as this one from Necro Minis. The ranks are criss-crossed which reduces the width of 4 32mm bases to roughly the same as 5 x 25mm squares. See below:

To calculate ranks, just group them as little “bunches” on the movement tray. The first 5 are the front rank, the next 5 are the second, and so on. To make your ranks more distinct, you could separate the models by pose/colour or by using unit fillers.

The drawbacks? Obviously, the unit is much longer than it is wide. While awkward, this is easier to deal with through house rules than a big wide unit. You’ll also have to compensate for missile/flame templates and probably a bunch of other stuff. It’s not perfect, but as a quick and easy conversion it’ll do.

Seriously, if you can design single 20mm or 25mm base converters, you stand to make a fair bit of money from Warhammer Fantasy collectors! As The Old World looms large, there’ll be a big appetite for this sort of kit.