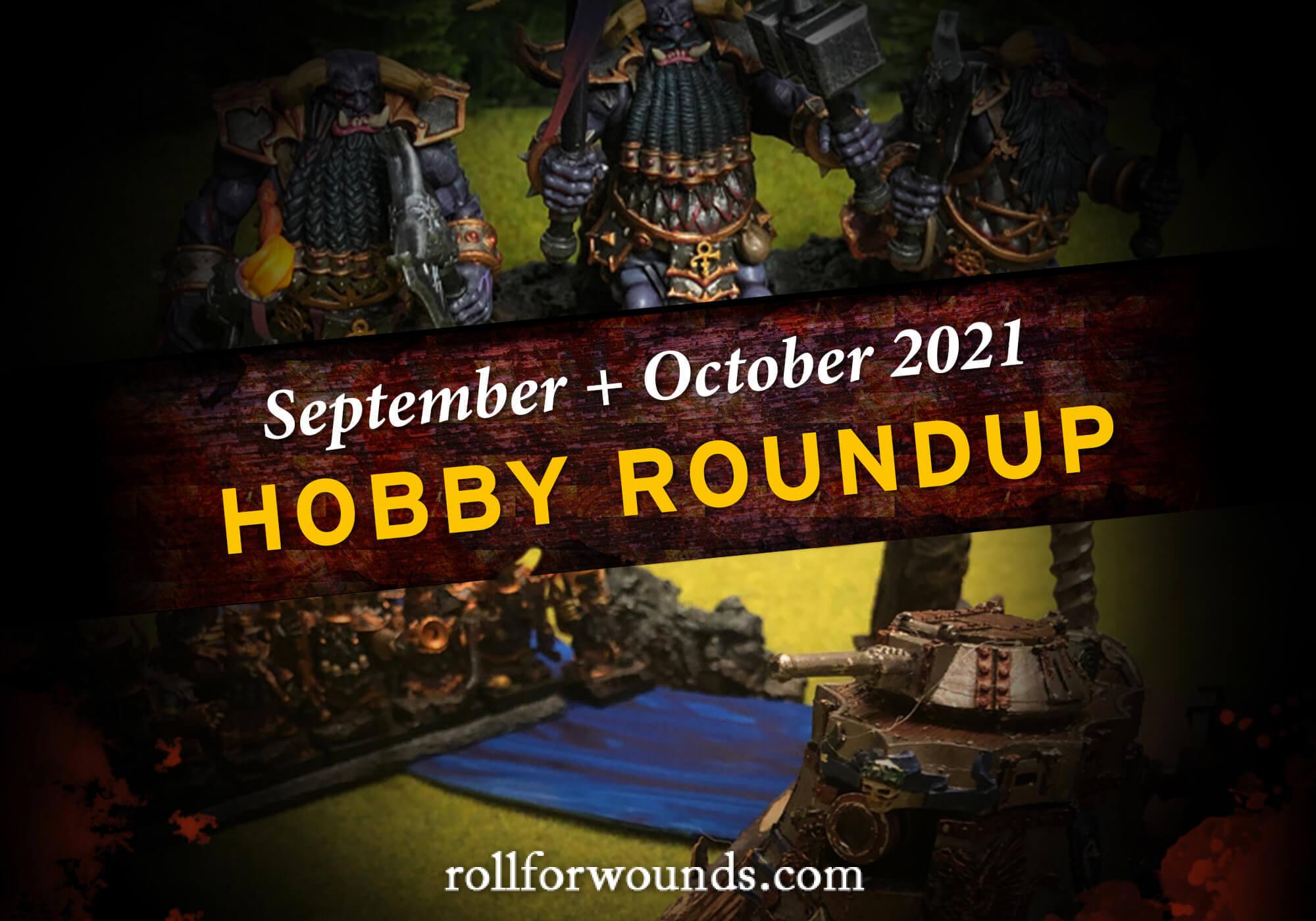 The past couple of months have mostly been spent on Gunthor, my ludicrous war giant. Besides that hunk of metal, I was able to finish a couple of projects and play a handful of battles.

I started these in the summer but only got round to completing them last month. As with all my Chaos Dwarfs, the Bull Centaurs are angry, purple, and march into battle under the Prince flag. All hail the Purple Reign of Pain! They took longer than I thought, but I was very happy with the results.

A kitbash from various sources, this was an unplanned and unorganised conversion. Armed with horns, mechanical legs and – you guessed it – the Prince Symbol, it will proxy as anything from a Magma Cannon to an Earthshaker or even an Iron Daemon.

To bolster my artillery, I also polished off a quick Rocket Launcher. It wasn’t long before its maiden voyage against a horde of Night Goblins (see below) but I don’t recall it being particularly useful. Oh well.

The Dread Squats of Hashut failed to make ground against the putrid Deathguard of Nurgle. Damn tough, so they are. A defeat for the dwarfs, but a victory in my getting to grips with 40k. Good game, and one small step forward in the great land grab of Tetanus Prime.

In a separate encounter for the same campaign, I fielded a Scions of Flame force against the Tyranids, offering the bugs some squishy meatshields for their venom cannons. The Imperium took a few down, but not enough for the Scions to survive.

Back to swords and shields… a skink scouting party ventures deep into Greenskin wastelands. Expecting orcs, the lizards are instead beset by a band of gibbering, spider-riding goblins. Things look favourable for the Seraphon, who seize a collection of crude mud huts on the outskirts. Victory seems certain until a particularly frothy goblin scuttles across the landscape, helping his cronies seize their town to drive off the reptilian invaders.

Tonight my goblins chew on lizard meat as they celebrate their first win in history.

Another campaign in a different world…

Though successful in holding their watchtower, the Stinkshin Goblins were aghast when Puppy, their pet giant, was mauled to a frothy pulp in front of their eyes. They’ll have an easier time reassembling him than they will persuading Da Boss that “daemons” were to blame…

Another excursion into Ravening Hordes, and yet again my Chaos Dwarfs find themselves facing a sea of Night Goblins. Predictably things got bloody, and while many goblins were felled or fled, the little pests got the edge over their outnumbered foe. If you ask me, the blame lies squarely with my Black Orcs, who took their sweet time charging then – judging by their dice rolls – converted to pacifism.

Picture the scene: a garrison of Chaos Dwarfs guard a river crossing on the outskirts of their capital.
A small band of Empire scouts must escape to the other side and inform their general of the newfound Dawi Zarr.

All well and good, but the Empire have a Steam Tank. And it misfires. And it explodes.
The game was a dice roll away from *everyone* perishing in the explosion. Thankfully the dwarfs’ resilience to hellfire granted them a fateful advantage. Burnt and blistered, the Empire Captain was the only one of his kin to tell the tale. Let’s see if the generals back home believe him.