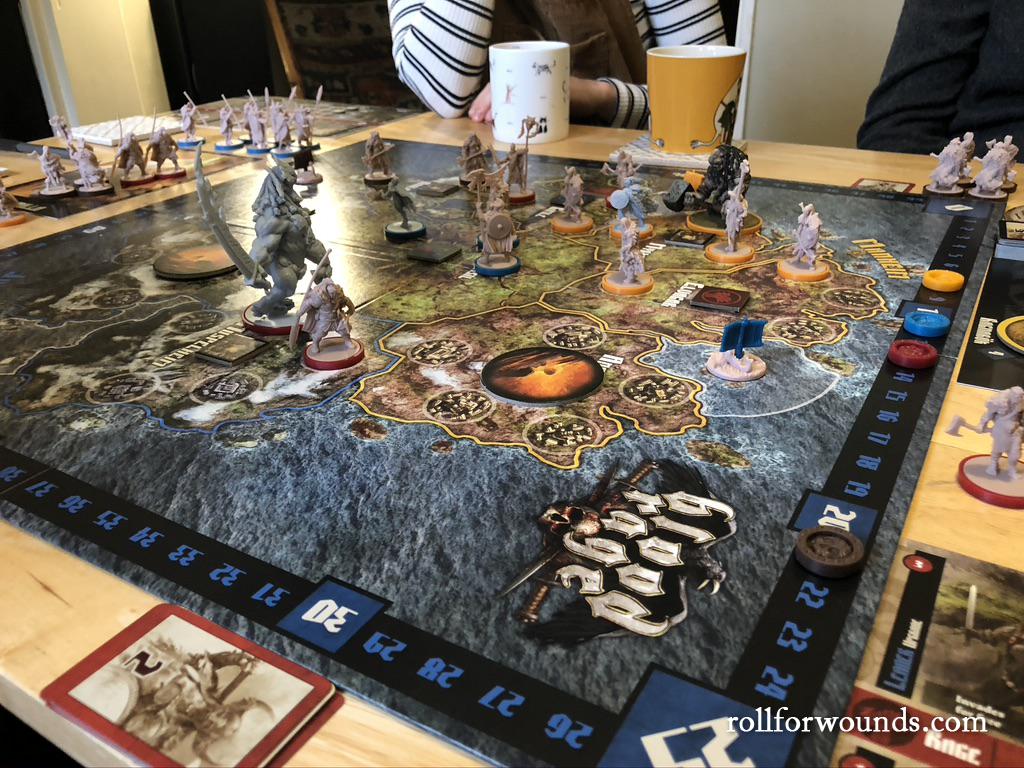 I received Blood Rage for my birthday. 12 months on and I’m still finding ways to hobby the damn thing. Painting those adorable Vikings was the catalyst that sparked my reentry into Warhammer Fantasy. For that, I thank this game and award it this little slice of webspace.

What is Blood Rage?

Set in the end times of Ragnarok, Blood Rage is a contest to kill, die gloriously or a combination of both. Armed with a mob of murderous raiders, you invade territories, fight, die, go to Valhalla then repeat until the world itself swallows you whole.

On its own merit, Blood Rage is an excellent game. It fuses mood and strategy into a bloody, competitive and highly replayable brawl. My friends and I have played it many times and don’t feel we’ve scratched the surface. That’s not to mention the 2 expansions, extra miniatures and multitude of house rules. Gulp!

For optimum performance, play Blood Rage to the sound of Viking war music. Really gets the blood pumping

Its miniatures are gorgeous

Blood Rage comes with 45 plastic miniatures: from rag-clad hermits to flaming hot hell giants. They’re detailed, characterful and begging to be painted. As a tabletop gamer, this makes for a lucrative double use. With movement trays and a bit of imagination, the Vikings of Blood Rage make perfectly good proxies for Warhammer, Age of Sigmar or any other fantasy wargame.

It includes base converters

The game uses circular discs to differentiate between players. With painted models, these are no longer needed. This makes them excellent tools for switching circular to square bases. In other words, you can make your Age of Sigmar monsters playable in Warhammer Fantasy. Who doesn’t want that?

It took a while for me to realise you can pimp board games, and boy is Blood Rage customisable! There’s miniatures to paint, terrain to build, templates to add and tokens to fashion out of old buttons. So far all I’ve done is paint and magnetise, but there’s plenty left in the creative tank. Check out these ideas:

So that’s why I like Blood Rage. Not a comprehensive review, more a “would you look at that!”

2 judgments on “Blood Rage: The Gift That Keeps on Giving”