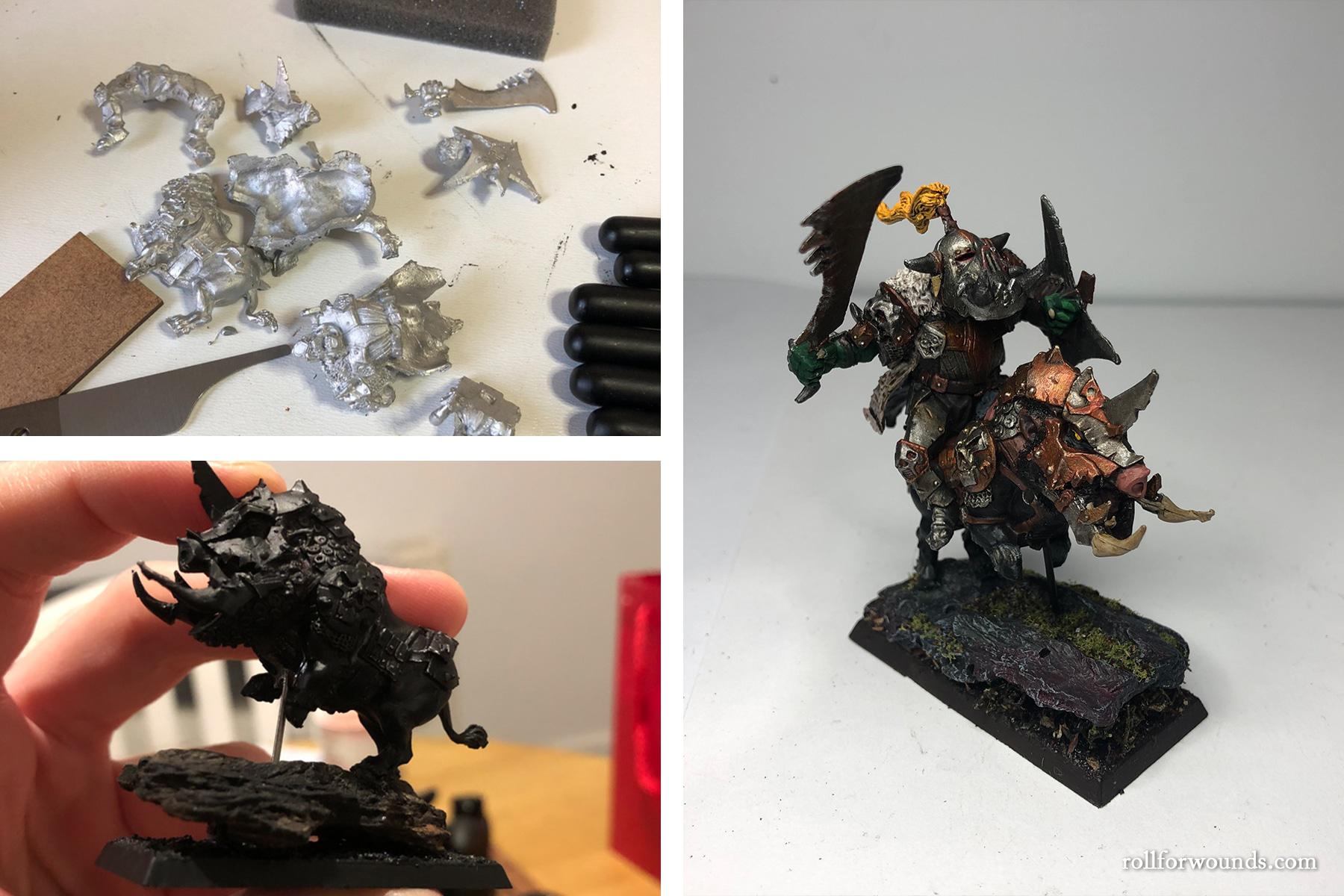 I was looking for a tough old orc to lead my starter Greenskin army. I’d heard a lot of good things about Mantic Games (makers of Kings of War) and decided to give their ‘Krudger on Gore’ a shot. Gore is such a great name for a murderous battle pig, don’t you think?

Here he is, fresh out of the blister pack. I didn’t have any Green Stuff at the time so I used a thick paste of sand and PVA glue. It did the job, in a rough and weathered way that you’d expect from a Gore. There were quite a few gaps but that’s to be expected really.

The base was conveniently handled by a piece of bark I found on a dog walk. One man’s trash and all that. I didn’t realise this hobby would take me to such dark and murky paths as dendrology.

I had an itch for my Gore to by raised on its hind legs, as if about to buffet an unfortunate dwarf into its namesake. I didn’t have the confidence to pin it by the legs, so I stuck a pole right through the chest to ensure optimum support. In painting the pole black, I hope it’s dark enough not to be very noticeable. You’d hope that a cleaver-wielding Orc would attract the eye more than an iron rod.

Some progress on the bark turned rock base. I painted this black with red and green washes + white highlights to emulate a mossy woodland rock. Credit to Squidmar Miniatures for recommending this technique.

So here’s where things took a turn. On finishing the piece, the head struck me as a little pea-sized in proportion to my other units. That’s not a criticism of Mantic’s sculpts, just a difference in style to Games Workshop’s more…heroic…body proportions.

After a few days of staring, drastic measures were needed and I invoked a head transplant. I replaced the Mantic Orc with a head I had rummaging around in my eBay pile. I kept the little helmet tail and gave it some red edge highlights to set it apart from copycats.

And voilà: a somewhat converted Orc Krudger riding his trusted Gore. He’ll make a fine general to my Greenskin army…that is until I get my hands on an Azhag…

A marriage of Dwarf and Orc. He shall be called Dr

They’ve had their spruce up. Not perfect by any

Puppies! A welcome addition to my growing force of