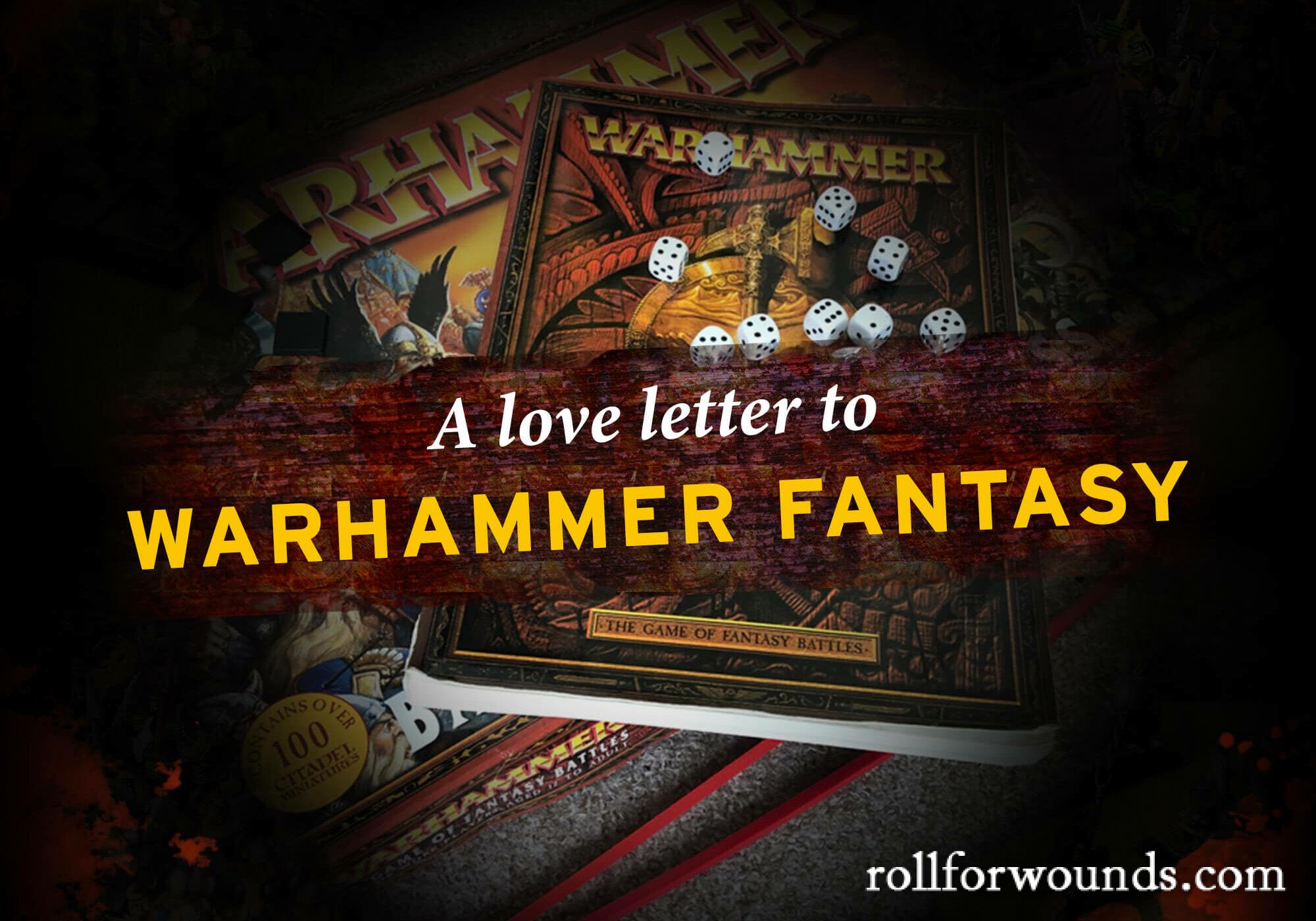 In the site intro I waxed lyrical about my childhood playing Warhammer Fantasy Battles (WHFB). Though the game is no longer manufactured, I believe it remains an accessible, affordable and hugely enjoyable hobby. This is my love letter to rank and flank, and a positive case for why you should give it a go.

What happened to Warhammer Fantasy? The story so far…

It’s hard to talk about Warhammer Fantasy without mentioning its successor, Age of Sigmar.

I stopped playing Warhammer during the game’s 8th edition. When I returned to the hobby in 2020, I assumed it was trundling along in version 10 or 11. Perhaps some rules had changed, wacky units introduced or Games Workshop had finally vindicated the Tomb Kings. You can imagine my surprise when I saw golden, godlike Space Marines Stormcasts battling on round bases in some kind of infinite astral plane. I soon learned that Warhammer Fantasy had gotten the axe and been replaced with something called Age of Sigmar. Gulp!

There are…misgivings…towards Age of Sigmar online and I don’t wish to fuel that. From afar, I can see that it’s a rich and vibrant world with a passionate following and lovingly crafted models. In fact, I’m quite excited to play my first AoS battle; I have round bases ready so my Orc – sorry, Orruk – tribe can bash some skulls in. I appreciate that out of Fantasy’s ashes Games Workshop have created an accessible game that’s sparked a renewed interest in the hobby and an uplift in sales. Good for them.

Rather than shake my fist at the Mortal Realms, I shall focus on the positives that keep me hooked to their predecessor. Is Warhammer Fantasy dead? Far from it – The Old World lives!

The Way It Looks

It’s hip to be square

If you were going to recreate a fight, would you rather the scuffle at Wethertop or the Battle of Helm’s Deep? Me, I’m all for the the latter: masses of bodies crashing into each other, ranks breaking and rallying while players oversee the battle like Peter Jackson himself. I want to look down at the tabletop and see beautiful squares packed with troops standing shoulder to shoulder. Pikes! Spears at the ready! Hooooold! Hell yeah.

An army on square bases can be fielded in Age of Sigmar – either on their own or with circular adaptors. Unfortunately, 32mm round bases can’t easily be played in WHFB. With that in mind, square is the flexible approach that lets you enjoy the most games. You could say that square…covers all bases…?

Square bases lend themselves to massive battle formations. They provide a sense of epic scope and an amorphous, unstoppable force. When they stand together, I find it easier to believe that one troop represents a hundred. Unless you’re Games Workshop and you literally have hundreds in your arsenal:

There’s beauty in the old models

By day, I am a web designer. Folks in my profession know a phenomenon called scope creep: when something simple and effective is endlessly tweaked until it becomes over-engineered and unsightly.

Now I’m not pointing fingers (okay I am a bit!) but the poses and detail in some modern miniatures verge on the silly. Units dance, flex and hop about as if starring on a variety show. Flames explode out of swords, magic spews in all directions and delicate chains intertwine endlessly around gilded armour. It gets to a point where, quite frankly, I don’t know what to look at.

I don’t mind the odd ostentatious centrepiece (see below) but when every model looks as if it’s competing for a Golden Demon Award, I’m out.

What makes the miniatures of the 80s, 90s and early 00s more pleasing to the eye? Perhaps it was materials or limitations in manufacturing. Maybe the lack of competition meant sculptors could stay in safer territory. Possibly the need for units to ‘rank up’ meant they had to maintain sensible proportions. Whatever the reason, I prefer a simpler, more uniform look to my troops. Thanks flying sharks, but no thanks.

Game of Thrones was never about dragons, and Lord of the Rings was not about Balrogs. I think Warhammer Fantasy treads a healthy balance between fantasy (mythical beasts and magic vortexes) and the everyday nitty gritty.

Monsters exist in the Old World, but they are seldom. So rare are giant units that there’s a special rule (Terror) that makes footmen quake in their boots when they see one. The Fantasy rosters limit these ‘rare’ choices to a certain percentage of your army. Monsters are a treat: a centrepiece to be proud and scared of in equal measure. The Hobby Room framed this succinctly where they ask: “How Much is Too Much?”

Moreso, Warhammer Fantasy is grounded in a living, breathing world. It has a map, an Empire, border disputes, ancient races and a timeline of events. When I paint my dwarf warriors I imagine where they’re from, what mountain they’re defending, what’s at stake if their millennia of riches are plundered. I find that harder to imagine in a cosmic, multi-dimensional void.

A miniature doesn’t have to be made by Games Workshop to be used in Warhammer. There are hundreds of talented sculptors that make exquisite, lovingly designed miniatures at 28mm scale. From Lost Kingdom’s Lizardmen to Twin Raven’s Bretonnia, Oathmark’s Fantasy Line and my favourite Russian Alternative Chaos Dwarves, we are truly spoilt for choice. Proxy units are unique, creative and if you look in the right places, an absolute steal.

Why is this great for Warhammer Fantasy? The game is decades old with dozens of army lists spanning many different editions. This means any miniature you like – from humble halfling to cantankerous Ogre chieftain – has a place. More often than not these figures are designed with ranks and squares in mind, so it’s dead easy to build an army out of interesting third-party miniatures.

That’s not to say you can’t do this for AoS – of course you can. There are so, so many manufactures deserving of your miniature money, often much cheaper than the official line. Support them and relish in the weird and wonderful!

The proxies mentioned above are generally more affordable than GW, and that’s just the tip of the iceberg. Third party miniatures go for as little as 25p per model if you look in the right place. To jump start your army, you can fill your ranks with cheap models then sprinkle in better ones for the front ranks and heroes.

If proxies aren’t your thing, there’s the second hand market. Facebook marketplace and eBay are brimming with dusty old Warhammer boxes discarded by ex-gamers, their parents or long-suffering spouses. With persistence you can find some great bargains on these platforms. Starter sets such as The Battle For Skull Pass frequently sell for around £75 – £90. That’s:

If we measure value by time spent enjoying something, then this is money well spent. Which makes this person’s find something of a godsend.

The way it plays

Warhammer Fantasy Battle has a rich and complex rule system that honours the quirks, flaws and heroism of its characters. Units cower in fear when they see a monster, rally bravely when near their general, fight blindly when they’re in a frenzy and hold lifelong feuds with historic enemies. There are flank attacks, rear attacks, sneak and skirmish attacks, battle standards, musicians, falling giants: the list goes on.

While the intricacies of WHFB are complex, they are not impenetrable. The core rules can be printed on an A4 cheat sheet, while advanced strategies can be introduced piece by piece as you learn.

Put it this way: you’ve invested dozens of hours into painting your army. Why wouldn’t you spend a little longer learning the rules? Maybe I’m weird.

The future of rank and flank

Where from here? Will Warhammer Fantasy come back in the guise of The Old World? Sigmar only knows. If it does, myself and many others will flock back to Games Workshop with wallets raised. Until then, we’ll remain lurking in the bushes: dining rooms, Facebook groups and independent games stores. Come say hi!

One thing’s for certain: rank and flank is here to stay… from Oathmark and Kings of War to fanmade communities like the 9th Age or Wargames Orchard, there’s a thriving community for square-based skullbashery. It’s friendly, nostalgic and damn good fun. Long may it continue.